The so-called creative side :)

I decided that since I have way too much time to spend ( not like I always spend my time usefully :P) I'd try my hand at paper jewellery. It could be called jewellery from waste since I essentially used newspapers, old magazines and brochures. I had Jo's birthday coming up and the sister was leaving back so decided to try my hand at this stuff. I thought it came out pretty decently. The girls loved it so nothing else matters :)
Here are the picture : 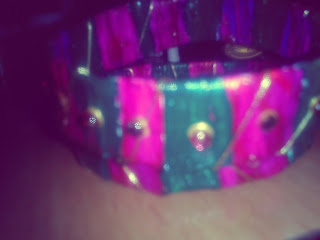 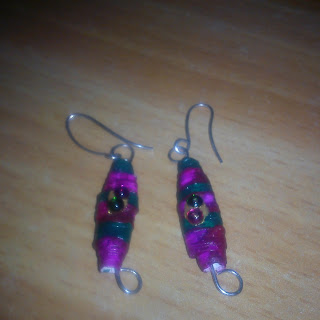 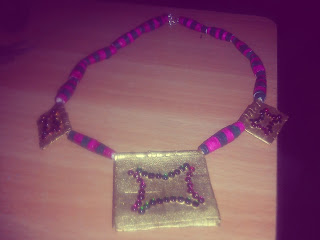 That was what I made for Pri.

Jo being the darling that she is wore it to work :) 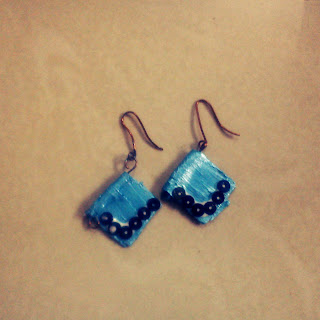 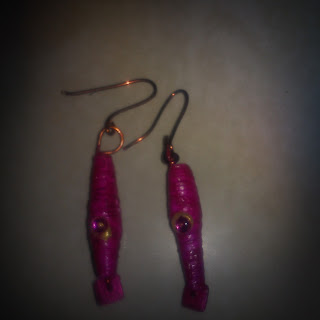 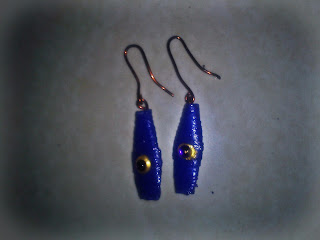 Posted by Unknown at 1:58 AM No comments:

Maybe some of us are lucky

Relationships are complex alright but some people make it more complicated.

So shouldn't someone consider themselves lucky if they have a partner(bf or gf) who doesn't :
I cannot think of anything else right now.If I do will post it. Meanwhile you are welcome to share your views.

Okay I am not really the writing-kind-of-person(Jo I can actually imagine you smiling when you read the first line:)) but I am so sick of all the rape stories. The past 15 days the only thing that most of us have heard would have been the brutal gang rape incident which happened in Delhi. There is nothing for me to say about it...it is TERRIBLE and shouldn't have happened and hopefully should never happen to anybody else. And you must have probably heard all the different opinions that  the media aired. Maybe we girls should all carry a taser and a can of pepper spray!I mean since we cannot be assured of safety we need to protect ourselves and hence this idea!
How come everyone wants to keep blaming the women...I mean if we get raped because of what we wear...then EXCUSE ME...so do men!There are so many men who roam around bare-chested and in boxers!!!!So how come they dont get raped???And if clothes are the issue then how come nobody in the US or UK gets raped????
Then there are these sick people who will come up with another reason which would be she was out late...which is why this happened...that has got to be the most irritating reason ever...and I would say the same as above for this as well!!!!
Also men stay out late all the time...every time I talk to my friend he's out at 2 am and 3 am...so how come men don't get raped???
So for god sake stop blaming the poor girl for no mistake of hers...you have NO IDEA what she went through(You might say no I was watching the news and I heard this and blah blah...but come on you have no right to judge her)!!!And what if she was someone you knew???
And then there is this moronic group who will keep sharing all these grotesque pictures...about how much she suffered...how the rapists should be punished...what you can do when someone tries to rape you and so on...the worst part being like/share if you want to end her suffering.Now seriously get a life!!!Sharing was an option that was enabled so you could share pictures/personal stuff with your friends...not to SPAM news feeds!!!More importantly it will in no way end her suffering!She has died and now she is probably in a better place...you and I are never going to be able to even imagine what she went through so for the love of god stop sharing such nonsense!!!!
If you really wanted to help her (and other rape victims), you should have gone to Delhi and held her hand and said don't worry we'll nail the losers and make sure they get punished!Or help other rape victims...I honestly would like to know how sharing all these annoying pics/info will help someone in a lot of pain:X.
Also did you know there are many other rape cases which end up without much attention from the media...so how come you don't want to help those poor girls????So you'd only help if there is attention from the media???Is that what this is about???Then you are just plain ATTENTION SEEKING and not helpful!
How come nobody wants to go to Delhi and visit her parents????

In the picture  you can see that 2 girls have been called whores and this picture is being shared by so many people...so if you are going to stoop down to such a level that you call someone a whore(To begin with do you know if this was morphed or is just being randomly circulated!And is that your problem that they are getting all the attention and you are not...now we know who is attention seeking!!!!and not that someone went through so much????)You call another girl a whore...how is anybody else going to respect you?!!?!!
Do you know how someone got into being a whore...have you sat and listened to why they became like that???Then why do you judge someone like that!!!!
Then there is this annoying crowd who will keep calling rapists and other criminals with animal names like rapist pig and so on!!!Have you ever seen a pig's face???It is too cute and incapable of such behavior !!!Not just the pig...but all animals so for god's sake please stop using animal names to abuse people!!!!They are extremely gentle creatures and are the only respite from HUMAN behavior !!!Do animals use your names to abuse each other???
We are the ones who abuse animals and if I start writing about that it'd just be endless so'll just stop this here.....
Now you might wonder...she's writing so much how come she does not want to do anything...I am going to hopefully do something in my own small way...
Posted by Unknown at 12:44 PM No comments: